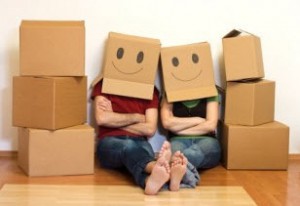 But this time, something struck me….

While you’re in the middle of it, somewhere between the moving of boxes and the unpacking of them, is typically where you fall apart a bit. This is where people get a bit cranky, go a bit nuts, have a little cry – mini-nervous breakdown country.

I think it’s because right there, in the middle between the moving and the unpacking, your brain suddenly realizes you’re homeless. Only briefly, and in a very temporary sense, but utterly, completely homeless, just for a second or two. Hence the freak-out.

And the thing that struck me?

Moving job can be just the same.

That new job excitement – you know, that moment just after the moment when you get the call to say “You’re in – Congratulations!” When you’re doing a little dance, high-fiving your mates and patting yourself on the back, opening the champagne…By the time most new recruits get to step 7 above, all that good stuff is forgotten.

You know when you move into your new house and the keys don’t work all the doors? That’s the keycard you just gave that great new employee which actually doesn’t work in the lift. Or the garage. Or the main entry.

How about getting your internet connected in the new digs…sorry that’ll be three weeks. Like the three weeks some companies take to get someone properly set-up IT-wise, email account, workstation/laptop, phone, network credentials, ID etc.

Transferring your gas and electricity services? (Have you ever been on the phone so long you became extinct?) Moving those services is rather like trying to sort out banking and payroll information for a new hire.

Wait! Did someone say extinct?

It doesn’t have to be this way.

In the Moving House scenario, about 15 minutes after Henry Ford built the first Model T, the first Removalists came into existence. And those guys have been helping people move house ever since. Taking all the misery out of packing up, shifting, unpacking and moving in.

But what about the Moving Job scenario?

Companies that get this right have what I’d call an Induction Specialist – someone versed in the magical powers of Induction, with a solid on-boarding programme to boot. To take the misery out of signing up, sitting down, connecting up and getting to work.

“All that keycard, networking, payroll stuff will be taken care of – we value you, and are glad to have you on board. Now let me introduce you and show you round. I’ve already filled out all the boring forms for you – let me know what else I can do.”

These Induction types help people settle in, and get down to business – not break-down on the second day. And they help those great new employees stick around, feel a part of something worthwhile, feel like they made the RIGHT decision.

Problem is, all too often we speak to companies with no Induction Specialists. No plan. No welcome wagon.

Where’s the new job excitement in that?